To celebrate the home entertainment release of ACTS OF VENGEANCE which will be available on digital download 23rd April and on DVD & Blu-ray from the 7th May 2018, Flickering Myth have a copy of the Blu-ray up for grabs, courtesy of Kaleidoscope Entertainment! 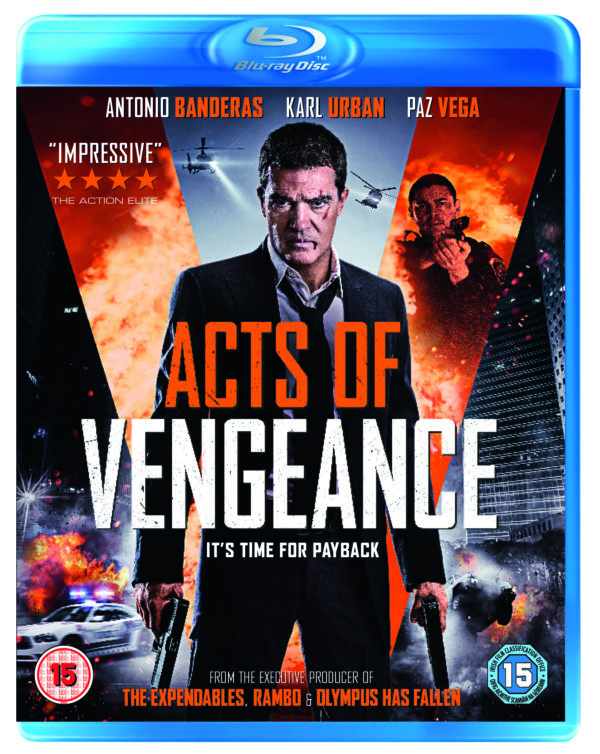 From the producers of The Expendables 1 and 2, Rambo, Olympus Has Fallen and London Has Fallen, comes Acts of Vengeance – an edge of your seat action thriller starring Antonio Banderas and Karl Urban. Banderas excels as a fast-talking lawyer who transforms his body and takes a vow of silence, not to be broken until he finds out who killed his family and has his revenge. With it’s astounding production pedigree, Acts of Vengeance is packed with intense action, perfect for fans of the Taken series.

Frank Valera (Banderas) is a high-powered corporate defence lawyer who lives for his wife and daughter, but unfortunately has little time for them.

When he misses his child’s talent-show recital, remorse turns to concern when the duo don’t return home that night. Later, police lead him to their slain bodies in a storm drain, victims of a mysterious crime. Taking a vow of silence, not to be broken until he finds out who killed his family, Valera takes the law into his own hands to discover the truth, and get the ultimate revenge.

Starring Antonio Banderas (The Mask of Zorro, The Skin I Live In, Desperado) and Karl Urban (Star Trek, The Lord of the Rings, The Bourne Supremacy) Acts of Vengeance proves that payback really does speak louder than words.

The competition closes at midnight on Sunday, May 6th. UK readers only please. To enter, use one of the following methods…